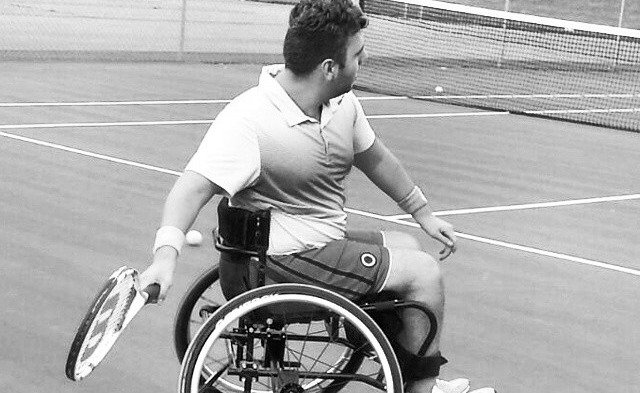 My name is Arben Duraku.  I am 17 years old and I live in Oslo, Norway. I have been disabled all my life and I want to share my story. I was born in Prishtina, Kosovo in 1997; one year before the war started. Back then, we lived in a town called Stanofc, in the municipality of Vushtrri which is in the northern part of the country. In 1998, during the Kosovo war, we escaped its horrors by train. First we went to Macedonia and there we requested asylum in Norway, Sweden, German and the United Kingdom. Very soon after we arrived in Macedonia, we were granted asylum in Norway. When we arrived there, for the first two weeks, we stayed in a town called Harstad, which is located in the north of Norway. Then we moved south to Oslo, the capital.

When I was 8 years old, I was diagnosed with Arthrogryposis Multiplex Congenita (AMC). It is a disease of newborns resulting in decreased flexibility of the joints. Symptoms differ drastically from person to person, including stiff joints and muscle weakness. The areas that are most likely to have lack of movement are the shoulders, elbows, wrists, hands, hips, knees, and feet. The lack of movement, unlike many other diseases, does not get worse as time goes by. However, it is necessary to seek treatment to prevent further impediments of the joints.

When I first found out about my condition, I was very sad, but I knew that no matter what, I had to accept it. I was told that it might be possible to walk, but that if I was going to do so, I would have to work very hard and do a lot of physical therapy. I had a choice to make: focus all my effort on walking, or accept a wheelchair and other tools to facilitate my movement. I was discouraged and very demotivated by my diagnosis, so I decided to use a wheelchair. Some people might say that I took the easy way out, but I don’t see it like that. I’m not embarrassed about my decision, but rather I’m proud of it. As an 8 year old child, I was able to decide my own outcome and the path that I thought was best for me at that moment. I accepted the fact that I would not walk and decided to move on with my life and make the best of my situation.

Ever since I was a child, I loved sports: everything from swimming to football. Even now, I love sports and while I was watching the coverage for the Paralympic games in London in 2012, I had the opportunity to see wheelchair tennis being played. The game instantly caught my attention because it looked intense, challenging and also extremely funny. Later that year, I was at physical therapy and I was told to start a sport to help with my condition. I immediately thought about the day that I watched wheelchair tennis and mentioned it to my therapist. She did some research and found a wheelchair tennis club in Oslo. She called them and asked if I could visit to see for myself what it was like. I had absolutely no doubt that I wanted to start playing. After my first training session, I made the decision right then and there to continue playing.

My two biggest motivational and inspirational factors have been my cousin in Sweden who also plays tennis and my coach.  My coach was one of the best players in Norway and told me that he sees a bright future in me.  I was 15 years old when I started playing and the average age of the players at the club was 26+ years.  This has motivated me to become a good player and to work hard to achieve my goals.

Today I study at one of the best schools in the region of Oslo, Oslo Handelsgymnasium (OHG).  My academic focuses are business and economics. As a person I’m creative, funny and optimistic. Besides tennis, I love swimming, gaming, reading and learning new things. Throughout my life, I had to overcome all kind of obstacles because I am disabled. It’s always a challenge, but nothing is impossible. Sometimes you just need to work your way around it, and other times you just need to learn to accept the circumstances. For me I’ve always loved sitting in the back of the cinema, however I always have to sit in the first row. Other times when rolling around on my super cool wheelchair, sometimes it can be hard to fit in tight spaces. In moments like these, it is important to understand that you don’t need to feel bad for requesting help or asking others to make room for you.  When I ask for help in stores because there is a product that I cannot reach, I don’t feel bad because I have found a solution that works for me. Keep in mind that there is always a solution and if not, you need to accept your circumstances. I would like to say to other people that are disabled that no matter what the condition(s) are, remember the motto that I live by:  “Everything is possible if you believe in yourself, work hard and make the best out of your circumstances.”